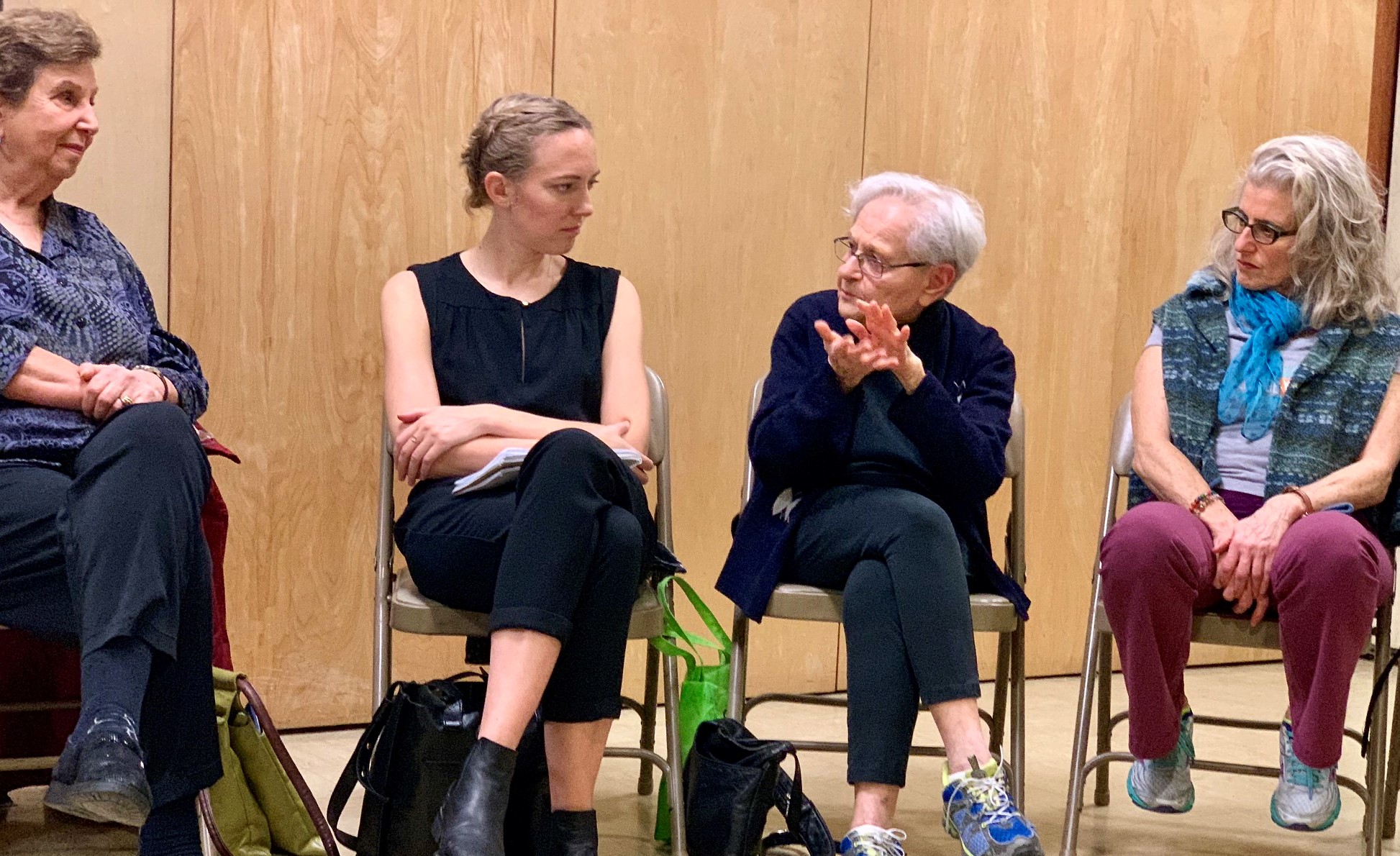 West End Synagogue is committed to universal adult study of Jewish sources, history and cultural expression in its many forms. Through our Adult Education Project, we pursue our vision of a congregation as literate and well-educated in Jewish terms as it is in secular terms.

Plan to join us for stimulating and thought provoking events!
Our co

October 29, 2020
Rabbi/Professor Reuven Firestone, “The Concept of Holy War in Judaism,” 7:30 pm
Firestone, Professor in Medieval Judaism and Islam at Hebrew Union College in Los Angeles says that we know about the Crusades and Jihad, the “Holy Wars” of our monotheist neighbors. “But Jews don’t do those kind of things!”
In fact, he contends, Jews have done those kinds of things, and some still do. The Israelites were a militant community for centuries. But victories grew few and war eventually became a horrific disaster for the Jewish people. Judaism changed as a result from a militant to a quietist religion. After surviving for nearly two millennia, the Jewish people were nearly destroyed in our own lifetimes. Judaism is changing again as a result to become a more militarily assertive religion. How and why these changes are oc¬curring will be Firestone’s focus.

Monday November 2
Mel Scult, “The Journals of Mordecai Kaplan, Volume 3,” 6:00 pm  [The recording of this event is now available online via the video link below]
Scult, is the leading Kaplan scholar. In his talk he explores Kaplan’s compelling diary thoughts on the war, on Nazism, on democracy, on God and Judaism and the ethical life

November 10 • Nov. 24 • December 1 • December 8, 2020.
Carole Kessner, “Jews and Blacks in Literary Conversation,” 6:30 pm
Using a combination of fiction, poems, essays, letters, this mini-course will trace the “ups and downs” of that collaboration beginning with the founding in 1909 of the NAACP through the sixties, and the current Black Lives Matter movement.

November 23, 2020
Sam Norich, “The Jewish Press, A Century Ago and Today.” 7:30 pm
Norich, President of the Forward for nineteen years, contends that even as the lives of American Jews have been transformed in the last hundred years, the Jewish press continues as a key instrument of community. But the American Jewish press has largely failed to adapt to the digital revolution and now faces fiscal and generational challenges. What can be done to save it, and what is the role of journalism that other institutions are incapable of playing?

January 4 • January 25 • February 1, 2021
Susan Schorr, “Fun With Talmud,” 7:30 pm
We know that the Talmud combines elements of the U.S. Federal Register with Aesop’s Fables, the Federalist Papers with Poor Richard’s Almanack. It is the next-generation (after the Torah) source material for the Jewish legal code and articulates the principles for Jewish religious life without a temple. It also records the Jewish conversation for centuries. In this 3-session mini¬course, we will get a brief taste of the varieties of Talmudic dialogue and enjoy the meanderings of their arguments and discussions.

January 27 • February 17, 2021
Lorna Ronald, “Technology and Jewish Values,” 7:30 pm
Ronald will introduce you to theoretical frameworks about how values are embedded in technology design and use. The mini-course will help you to apply these frameworks to your own interactions with technology in daily life. The goal is to help people better align technology to their own values.

February 16, 2021
Dan Van Doren, “Jewish Short Stories,” 7:30 pm
A celebration of Jewish short stories on Jewish themes. WES congregants will be chosen to read aloud two to three short, short stories by authors such as Grace Paley, Etgar Keret, Jonathan Rosen, and others, with time to discuss the stories afterward.

March 1 • March 8. 2021
Art Spar, “Mordecai Kaplan and God: Reconstructing the God of Pirke Avot,” 7:30 pm
In the first session, this mini-course will explore Kaplan’s theology using excerpts from Mel Scult’s, “The Radical American Judaism of Mor¬decai M. Kaplan.” The second session will look at our early Jewish text, Pirke Avot, discussing ways to reconstruct the God of our early Rabbis.

March 4, 2021
Barry Seldes, Author of Leonard Bernstein: The Political Life of an American Musician will speak on “The Jewishness of Leonard Bernstein,”  7:30 pm
Bernstein was very much aware of his Jewish ethnic and cultural heritage. How he gave expression to his Jewishness through his compositions for concert hall, Broadway stage, and orchestral conducting will be our focus.

March 17, 2021
Mel Scult, “Henrietta Szold,” 7:30 pm
Henrietta Szold is well known as the founder of Hadassah and as a key person in rescuing children from Germany in the 1930s. But what attracts Scult to her is her stature as a person. She was brilliant and heroic. In a sense her accomplishments have overshadowed her as a human being.

April 5 • April 12 • April 26 • May 3, 2021
Mel Scult, “The Book of Job and the Masque of Reason,” 7:30 pm
Robert Frost’s “The Masque of Reason,” is a comedy with a serious subject. It purports to be the 43rd chapter of the Book of Job which, of course, has only 42 chapters. It presents Job and Mrs. Job and God in quest of answers to the fundamental problem of evil and suffering. This mini-course will have 4 sessions: three dealing with the Book of Job itself and the fourth with Frost’s play. (Please bring a copy of the full Bible to the first class.)

May 13, 2021
Robert Pollack: “Jewish Ancestry is not Jewish Identity,” 7:30 pm
What does it take to be a Jew and who decides that? We will explore the range of answers to those questions and consider in particular the differences between Jewish identity and Jewish ancestry, which some have come to think of as a predestined matter of what is in our DNA. (Bob Pollack is a member of West End Synagogue). Bob Pollack spoke in November at GroundWaves on Science & Religion
on topics in Science and Religion, Identity, and more
﻿To view his talk click HERE
(Bob Pollak is introduced by Rabbi Adina Lewittes at 11 minutes into the video, and begins speaking 12 minutes)

“Wise Aging, Living with Joy, Resilience and Spirit,”
Led by Sandy Warshaw.
Tuesdays, 3:00 - 4:30 pm
An eight-week course to explore the power to prepare to become stronger, more resilient and navigate the challenges of aging. WES members only.

Middah on Mondays Study Group
Monthly, third Monday of each month 7:00 pm to 9:00 pm.
Led by Susan Schorr
All WES members are invited to join our study of West End’s Middah (ethical value/character trait) of the month. Discussions are shaped using texts from both our tradition and from modern authors, pop culture and more.

TORAH STUDY
9:00 am to 10:00 am
Shabbat mornings
Led by Rabbi Emily Cohen or various lay leaders.
Text study of the weekly Torah portion. As a learning community, we seek to draw on our texts, honor them for what they represented in their time of creation and explore how they can be applied in our time.

CHUG IVRI
2:00 pm to 3:00 pm
Last Shabbat of each month
Led by David Goldfarb
A chance to gain fluency in Hebrew by reading and discussing stories, poetry and articles on current affairs.

West End Synagogue is committed to universal adult study of Jewish sources, history and cultural expression in its many forms. Through our Yad Mordecai Adult Education Project, we pursue our vision of a congregation as literate and well-educated in Jewish terms as it is in secular terms.

Adult Education programs and activities focus on the vital areas of education, community, and outreach:

Activities sponsored by Adult Education include:

For more information contact the wesoffice [at] westendsynagogue.org (WES Office).

Make a payment or donation online

More information about WES Shabbat Services and Programs. See our Calendar for this week's offerings.